Hybrid, borderless offices & big shift in culture: 5 Things to know about work in 2022 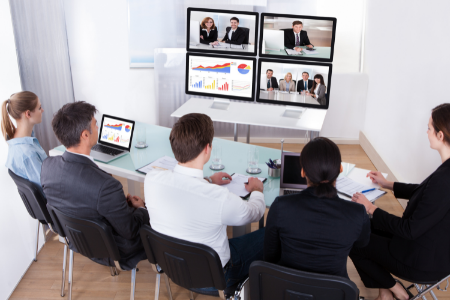 The pandemic has been described as our “once in a generation… opportunity to reimagine how we work”. While work-from-home (WFH) is perhaps the most pervasive change, experts believe that a number of other factors will impact work in 2022.

The workplace remains a highly contested space. After nearly two years of pandemic-related flexibility around where we work, it’s clear that simply going back to the office in the traditional nine-to-five sense is not an option in 2022.

As such, hybrid work models offer the ideal ‘middle ground’ between working from home and returning to the office full-time.

“A hybrid model, when approached with structure and thoughtfulness, can be very successful. It’s a progressive way of working, and should be embraced and enjoyed. In my experience, when people feel comfortable and understood, they deliver some of their best work,” says David Seinker, founder and CEO of The Business Exchange, whose serviced office space offering has been promoting hybrid work models for years.

Seinker explains that the hybrid model also offers significant benefits for companies concerned about being tied down by long, inflexible leases in the current fast-changing world of work.

“If they choose the option of a fully-serviced, professional office in which to pursue this hybrid approach, they can save on rental costs through more efficient utilisation of space and associated costs, including large fit-outs, furniture and even IT infrastructure,” he says.

Mental wellbeing must become a priority

Awareness around mental health in the workplace is growing — and rightly so, as one in every six South Africans suffers from a mental illness. As such, mental health protection should be a responsibility shared by the individual, family, friends and employers.

Matt Poladian, VP of People at Liferay, believes supporting mental health should be motivated by empathy which demonstrates a genuine concern for the ideas, feelings, and life experiences of others.

“The best way to build empathy is to listen intently to your people and proactively ask questions to learn more about what is going on with them,” he says.

Poladian adds that empathy is essential for building an environment where all employees feel safe and comfortable.

“This is critical not just for the employees’ well-being but also for an organisation’s creativity and productivity.”

In many instances, company culture has been another casualty of the pandemic as companies have found it challenging to maintain a culture in instances where the majority of employees were working remotely. But culture is key to a company’s success and deserves to be prioritised, irrespective of where teams are located.

Fostering the right company culture has been an important part of SweepSouth’s toolbox in building one of the fastest growing tech start-ups in the country.

“Having a great company culture plays a powerful part in a company’s success,” says SweepSouth CEO and co-founder, Aisha Pandor.

“It’s a driving force in how you do business and has a big impact on how you develop strategies. It also creates focus among your employees and engenders a feeling of identity.”

SweepSouth launched in 2014, and early on set their company culture to embody specific principles. All employees are expected to follow those, and the company has added adherence to them in their yearly KPAs.

Despite being separated by working from home during the pandemic or sheer geography (the company now operates in Kenya and Nigeria, too) all employees embody the same key values, which include delivering quality work, and being respectful, innovative, flexible and trustworthy.

The rise of the borderless office

The pandemic has shown that remote and hybrid working can be effective and it has also accelerated a shift towards the more widespread adoption of borderless offices. Borderless offices help to define work as a thing we do rather than a place we go, with productivity as the bottom line rather than physical presence.

Hayley van der Woude, MD at integrated PR and marketing agency Irvine Partners believes the borderless office concept has the potential to strengthen and enhance a company’s offering and shares that their own experience of borderless offices has been very positive.

“We have teams across six territories in Africa and the UK, which means we draw on a rich variety of skills, experience, expertise and cultural insights. As a result, our output is more dynamic, more inclusive and ultimately more relevant, which is of great benefit to our clients,” she says.

The ‘right’ skills are often touted as the answer to many of the world’s employment and innovation challenges.

“Too often we are made to believe that a particular set of skills is the silver bullet that future proofs a career, but the reality is far more nuanced than that,” says SizweSihle Dlamini, Customer Experience Director at Hoorah Digital.

He believes that the social skills needed to thrive in the Fourth Industrial Revolution (4IR) economy are the ones that deserve more attention.

Typically referred to as ‘soft’ skills, these are the skills that allow you to influence decision making and get stakeholders on board with a more customer-centric way of doing things, as one example.

But most important, according to Dlamini, “is the ability to constantly learn, unlearn and relearn will be the skill we most value in a tech-enabled future. And it starts, simply, with a mindset that values the utility and importance of a fluid approach to learning.”

How businesses can help build the next ICT generation

Time to get our tax affairs in order

SA’s economy has a small window of opportunity...

How To Improve Your Personal and Business Credit...